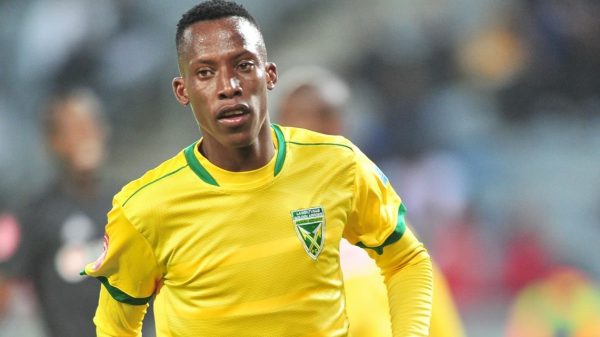 Whilst Football is on hold due to the coronavirus pandemic, South Africa Premier League giants Mamelodi Sundowns are already planning ahead for the future as they target to spring a transfer surprise for the coming season with the signing of highly-rated Zimbabwe Warriors left-back Divine Lunga.

According to reports reaching soca263, Pitso Mosimane’s side are incredibly keen on sealing a permanent deal for the 24-year-old talented Lamontiville Golden Arrows defender, who impressed for the Warriors against host Egypt in the opening Afcon 2019 finals – prompting interests from several European clubs including Belgian side KRC Genk.

The “Brazilians” who have been tracking Lunga for a while now, believes the Warriors left-back is the ideal target to boost their defence for the coming season.

Sundowns currently have two specialists left-backs in Tebogo Langerman and Mosa Lebusa but have sometimes played different players as makeshift defenders due to short of stuff in that position.

Lunga has become an important player for Abafana Bes’thende ever since he arrived from Chicken in 2018/19 season, featuring in 42 Absa premiership matches to date.

The Mpompoma born defender has 13 national team caps so far with the Warriors after making his debut in 2015 against Comoros.

It is now to be seen whether Golden Arrows will be ready to let go one of their most valuable players after recently turned down offers from Turkey for the player.