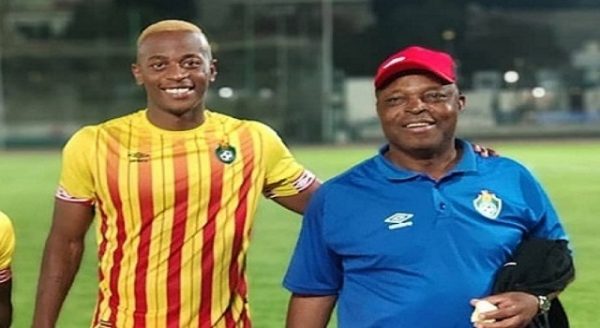 Zimbabwe Warriors defender, Alec Mudimu has hailed retired former Warriors Coach Sunday ‘Mhofu’ Chidzambwa’s influence as a major factor in turning him into a reliable center back at the national team.

The former Cefn Druids and Sheriff Tiraspol midfielder who celebrated his 25th birthday in isolation at his new club in Moldova yesterday due to the world wide Coronavirus lock down, told Soca263 that he is forever grateful to Mhofu for believing in his potential.
“I am forever grateful for Mr Sunday Mhofu because he believed I could do great things at the back and made me beleive in that too,” said Mudimu
“I’m grateful for him and his services to the nation because it could have been a completely different story.
Mudimu who had never played centre back before, explained how Mhofu approached him during Four Nations tournament in Zambia to offer him the centre-back position.
“I remember it was my first ever call up to duty and we played on the four Nations tournament in Zambia,” said Mudimu
It was incredible, the atmosphere, the fans and playing with some of Zimbabwe’s elite players. Of course it was unbelievably nerve racking for myself as well but I thank God for supporting me and helping me perform go level I did.
But the Boss said to me the night before the game ‘are you comfortable playing centre back?’ and truth be told, I was so desperate to put on the National Jersey, I told him it’s a little foreign to me but I beleive I can do a job there and support the ball playing forward on the floor and over the top if that’s what it comes to’.
The Boss said he see positive potential there and I trusted his opinion and the rest is history really,” he said
As time went on I didn’t want to let him or the nation down, and here we are today so again, I am truly grateful for Mhofu,” added Mudimu.
With his physicality and good positioning the UK raised Mudimu has since grown into a regular center back at the national team where he has formed a strong partnership with Yeni Malatyaspor’s Teenage Hadebe.